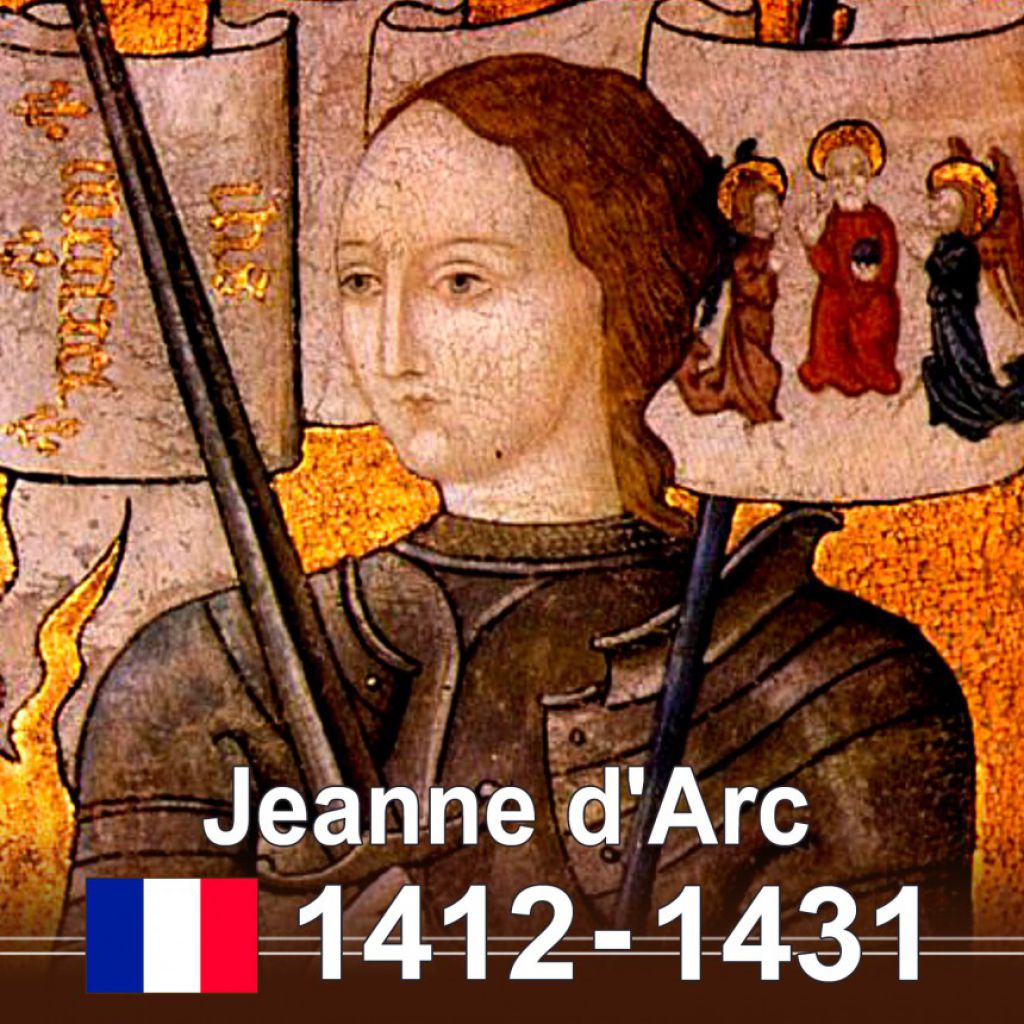 Joan of Arc, or Jeanne d'Arc (1412-1431), nicknamed "The Maid of Orléans", is considered a heroine of France for her role during the Lancastrian phase of the Hundred Years' War, and was canonized as a Roman Catholic saint.

She was born to Jacques d'Arc and Isabelle Romée, a peasant family, at Domrémy in northeast France. Joan claimed to have received visions of the archangel Michael, Saint Margaret, and Saint Catherine of Alexandria instructing her to support Charles VII and recover France from English domination late in the Hundred Years' War.

The uncrowned King Charles VII sent Joan to the Siege of Orléans as part of a relief army. She gained prominence after the siege was lifted only nine days later. Several additional swift victories led to Charles VII's coronation at Reims. This long-awaited event boosted French morale and paved the way for the final French victory.

On 23 May 1430, she was captured at Compiègne by the Burgundian faction, a group of French nobles allied with the English. She was later handed over to the English and put on trial by the pro-English bishop Pierre Cauchon on a variety of charges. After Cauchon declared her guilty, she was burned at the stake on 30 May 1431, dying at about nineteen years of age.

In 1456, an inquisitorial court authorized by Pope Callixtus III examined the trial, debunked the charges against her, pronounced her innocent, and declared her a martyr. In the 16th century she became a symbol of the Catholic League, and in 1803 she was declared a national symbol of France by the decision of Napoleon Bonaparte.

Joan of Arc is one of the nine secondary patron saints of France, along with Saint Denis, Saint Martin of Tours, Saint Louis, Saint Michael, Saint Rémi, Saint Petronilla, Saint Radegund and Saint Thérèse of Lisieux.

Joan of Arc has remained a popular figure in literature, painting, sculpture, and other cultural works since the time of her death, and many famous writers, playwrights, filmmakers, artists, and composers have created, and continue to create, cultural depictions of her.

france
WE VALUE YOUR PRIVACY!
No email-address required.
Just add your comment,
a UNIQUE username
and a phrase to be remembered by.
You will be automagically signed-in.

0
Facebook
Twitter
WhatsApp
oVPD5eFihKw biography-joan-of-arc-the-maid-of-orleans-1431 Biography | Joan of Arc: The Maid of Orléans (1431) She’s one of history’s youngest warriors. At an age when most of us were still stressing over what to wear to school, Joan of Arc was leading thousands of French troops into battle against the English.