The Granite-Carved Royal Monuments of Mamallapuram

In my last video I discussed the bizarre natural wonder known as Krishna’s Butterball, a large erratic boulder that balances on a bedrock slope, and has sparked the human imagination for centuries.

As stated, the boulder is part of the Mamallapuram UNESCO World Heritage site and in this video, I’m going to show you the other incredible monuments that led to such an internationally important status being granted.

It was a port city in the Pallava kingdom and the town was named after the Pallava king Narasimhavarman I, who was also known as Mahabali and Mamallan, meaning Great Wrestler or Great Warrior.

Many of the royal monuments are carved out of the living rock, and include rathas, meaning temples in the form of chariots, mandapas or cave sanctuaries, the giant open-air rock relief known at the Descent of the Ganges and the famous Shore Temple of Shiva.

Watch this video to find out more about this incredible lost city, to learn more about the fine granite stonework and how some monuments have been lost to the rising sea level, but were revealed during the 2004 Boxing Day Tsunami.

Log in
0
Facebook
Twitter
WhatsApp
y8a3zu7JTsw how-they-moved-the-60-ton-granite-blocks-into-the-great-pyramid 60-Ton Granite Blocks in the Great Pyramid. How? There are a number of theories in existence regarding how the Great Pyramid of Egypt was built, but how the Egyptians got the largest stones, those being 60-ton blocks of solid Aswan granite, high into the structure is a mystery all on its own. 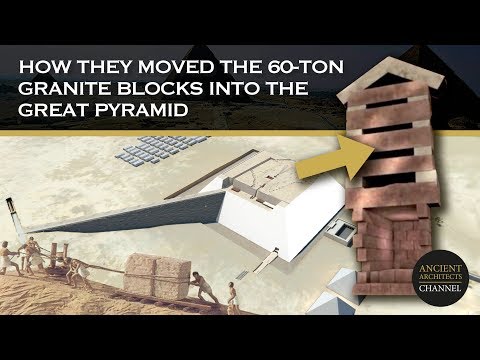 60-Ton Granite Blocks in the Great Pyramid. How?