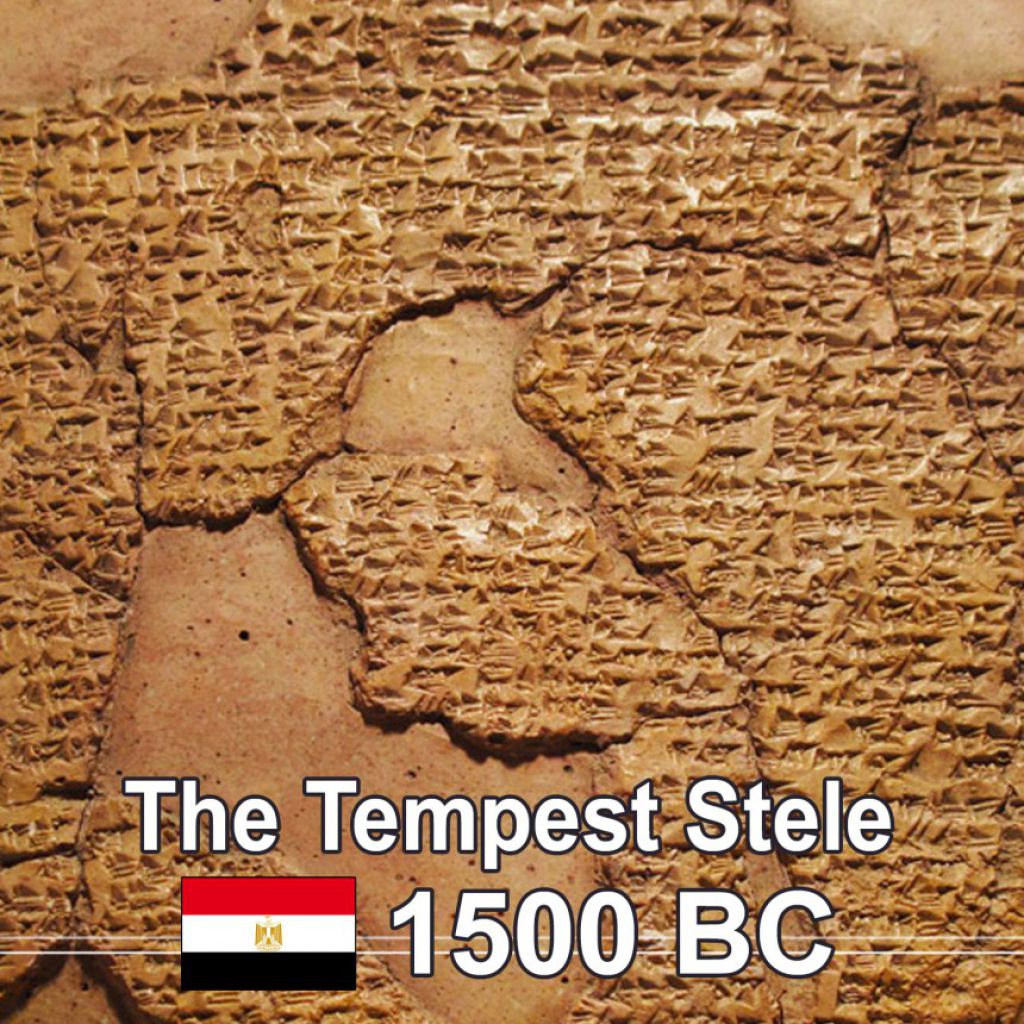 The Tempest Stele (alt. Storm Stele) was erected by pharaoh Ahmose I early in the 18th Dynasty of Egypt, circa 1550 BCE. The stele describes a great storm striking Egypt during this time, destroying tombs, temples and pyramids in the Theban region and the

Broken pieces of this stele were found in the 3rd Pylon of the temple of Karnak at Thebes between 1947 and 1951 by French archaeologists. It was restored and published by Claude Vandersleyen in 1967 and 1968. A new translation of a 40-line inscription on a 3,500-year-old stone block from Egypt called the Tempest Stela describes rain, darkness and the ‘sky being in storm without cessation, louder than the cries of the masses.’

The Tempest Stela dates back to the reign of the pharaoh Ahmose, the first pharaoh of the 18th Dynasty. His rule marked the beginning of the New Kingdom, a time when Egypt’s power reached its height. Broken pieces of the stela were found in the third pylon of the temple of Karnak at Thebes, modern Luxor, between 1947 and 1951 by French archaeologists. The stela consists of a single text in horizontal lines, copied on both sides of a calcite block that once stood over 1.8 m tall.

The side of the stela termed the ‘face’ or ‘front side’ had horizontal lines painted red, with incised hieroglyphs highlighted in blue pigment. The reverse face, or back, was unpainted.

Linguists Dr Robert Ritner and Dr Nadine Moeller from the University of Chicago’s Oriental Institute believe the unusual weather patterns described on the Tempest Stela were the result of a massive volcano explosion at Thera - the present-day island of Santorini in the Mediterranean Sea. Because volcano eruptions can have a widespread impact on weather, the Thera explosion likely would have caused significant disruptions in Egypt.

The new translation suggests the Egyptian pharaoh Ahmose ruled at a time closer to the Thera eruption than previously thought - a finding that could change scholars’ understanding of a critical juncture in human history as Bronze Age empires realigned. If the stela does describe the aftermath of the Thera catastrophe, the correct dating of the stela itself and Ahmose’s reign, currently thought to be about 1550 BC, could actually be 30 to 50 years earlier.

“This is important to scholars of the ancient Near East and eastern Mediterranean, generally because the chronology that archaeologists use is based on the lists of Egyptian pharaohs, and this new information could adjust those dates,” Dr Moeller said.

In 2006, radiocarbon testing of an olive tree buried under volcanic residue placed the date of the Thera eruption at 1621-1605 B.C.

Until now, the archeological evidence for the date of the Thera eruption seemed at odds with the radiocarbon dating. However, if the date of Ahmose’s reign is earlier than previously believed, the resulting shift in chronology might solve the whole problem. The revised dating of Ahmose’s reign could mean the dates of other events in the ancient Near East fit together more logically. For example, it realigns the dates of important events such as the fall of the power of the Canaanites and the collapse of the Babylonian Empire. This new information would provide a better understanding of the role of the environment in the development and destruction of empires in the ancient Middle East.

The Thera eruption and resulting tsunami would have destroyed the Hyksos’ ports and significantly weakened their sea power. In addition, the disruption to trade and agriculture caused by the eruption would have undermined the power of the Babylonian Empire and could explain why the Babylonians were unable to fend off an invasion of the Hittites, another ancient culture that flourished in what is now Turkey. Some researchers consider the text on the Tempest Stela to be a metaphorical document that described the impact of the Hyksos invasion.

Here are some descriptions of the storm.

(8) their discontent... The gods (made?) the sky come with a tempest of (rain?); it caused darkness in the Western region; the sky was

(10) cataract which is at Elephantine. Each house, ... each shelter (or each covered place) that they reached...

(12) with no one able to light the torch anywhere. Then His Majesty said 'How these (events) surpass the power of the great god and the wills of the divinities!' And His Majesty descended

(14) after the power of the god was manifested. Then His Majesty arrived in Thebes ... this statue; it received what it had desired.

(15) His Majesty set about to strengthen the Two Lands, to cause the water to evacuate without (the aid of) his (men?), to provide them with silver,

(16) with gold, with copper, with oil, with clothing, with all the products they desired; after which His Majesty rested in the palace - life, health, strength.

(17) It was then that His Majesty was informed that the funerary concessions had been invaded (by the water), that the sepulchral chambers had been damaged, that the structures of funerary enclosures had been undermined, that the pyramids had collapsed(?)

(18) all that existed had been annihilated. His Majesty then ordered the repair of the chapels which had fallen in ruins in all the country, restoration of the...

The stela’s text describes the ‘sky being in storm’ with ‘a tempest of rain’ for a period of days; the passages also describe bodies floating down the Nile like ‘skiffs of papyrus;’ importantly, the text refers to events affecting both the delta region and the area of Egypt further south along the Nile:

Long live (?) the Horus “Great of Manifestations,” He of the] Two Ladies “Pleasing of Birth,” the golden Horus “Who binds the Two Lands,” King of Upper and Lower Egypt, Neb-pehty-Ra, son of Ra, Ahmose, living forever.

Now, His Majesty dwelt in the town of Sedjefatawy (“Provisioner of the Two Lands”) [in the district just to] the south of Dendera.

Now then, A[mon-Ra, Lord of the Thrones of the Two Lands,] was in Heliopolis of Upper Egypt (= Thebes).

while his limbs were in joy.

[. . . Now then,] this great god desired [. . .] His Majesty [. . .] while the gods complained of their discontent. [Then] the gods [caused] that the sky come in a tempest of r[ain], with [dark]ness in the condition of the West, and the sky being in storm without [cessation, louder than] the cries [lit., “voices”] of the masses, more powerful [than . . .], [while the rain howled] on the mountains louder than the sound of the underground source of the Nile that is in Elephantine.

Then every house, every quarter that they (scil. the storm and rain) reached [. . . their corpses(?)] floating on the water like skiffs of papyrus outside the palace audience chamber for a period of [. . .] days [. . .] while no torch could be lit in the Two Lands.

Then His Majesty said: ‘How much greater this is than the wrath of the great god, [than] the plans of the gods!’ His Majesty then descended to his boat, with his council following him, while the crowds [on] the East and West had hidden faces, having no clothing on them after the manifestation of the wrath of the god. His Majesty then reached the interior of Thebes, with gold confronting gold of this cult image, so that he received what he desired.

Then His Majesty began to reestablish the Two Lands, to give guidance (or “a conduit”) for the flooded territories. He did not f [ail] in providing them with silver, with gold, with copper, with oil and cloth comprising every bolt that could be desired. His Majesty then made himself comfortable (= seated himself) within the palace (life! prosperity! health!).

Then His Majesty was informed that the mortuary concessions had been entered: the tomb chambers collapsed, the funerary mansions undermined, and the pyramids fallen – what had been made rendered non-existent (lit., “what had not been made”).

Then His Majesty commanded to restore the temples that had fallen into ruin in this entire land: to refurbish the monuments of the gods, to erect their enclosure walls, to provide the sacred objects in the noble chamber, to mask the secret places, to introduce into their shrines the cult images which were cast to the ground, to set up the braziers, to erect the altars, to establish their bread offerings, to double the income of the personnel, to put the land into its former state. Then it was done in accordance with all that His Majesty had commanded.

“This was clearly a major storm, and different from the kinds of heavy rains that Egypt periodically receives,” Dr Ritner said.

“In addition to the Tempest Stela, a text known as the Rhind Mathematical Papyrus from the reign of Ahmose also makes a special point of mentioning thunder and rain, which is further proof that the scholars under Ahmose paid close and particular attention to matters of weather,” Dr Ritner said.

Dr Marina Baldi from the Institute of Biometeorology of the National Research Council in Italy, has analyzed the information on the stela along with her colleagues and compared it to known weather patterns in Egypt.

A dominant weather pattern in the area is a system called the Red Sea Trough, which brings hot, dry air to the area from East Africa. When disrupted, that system can bring severe weather, heavy precipitation and flash flooding, similar to what is reported on the Tempest Stela.

“A modification in the atmospheric circulation after the eruption could have driven a change in the precipitation regime of the region. Therefore the episode in the Tempest Stela could be a consequence of these climatological changes,” Dr Baldi said.