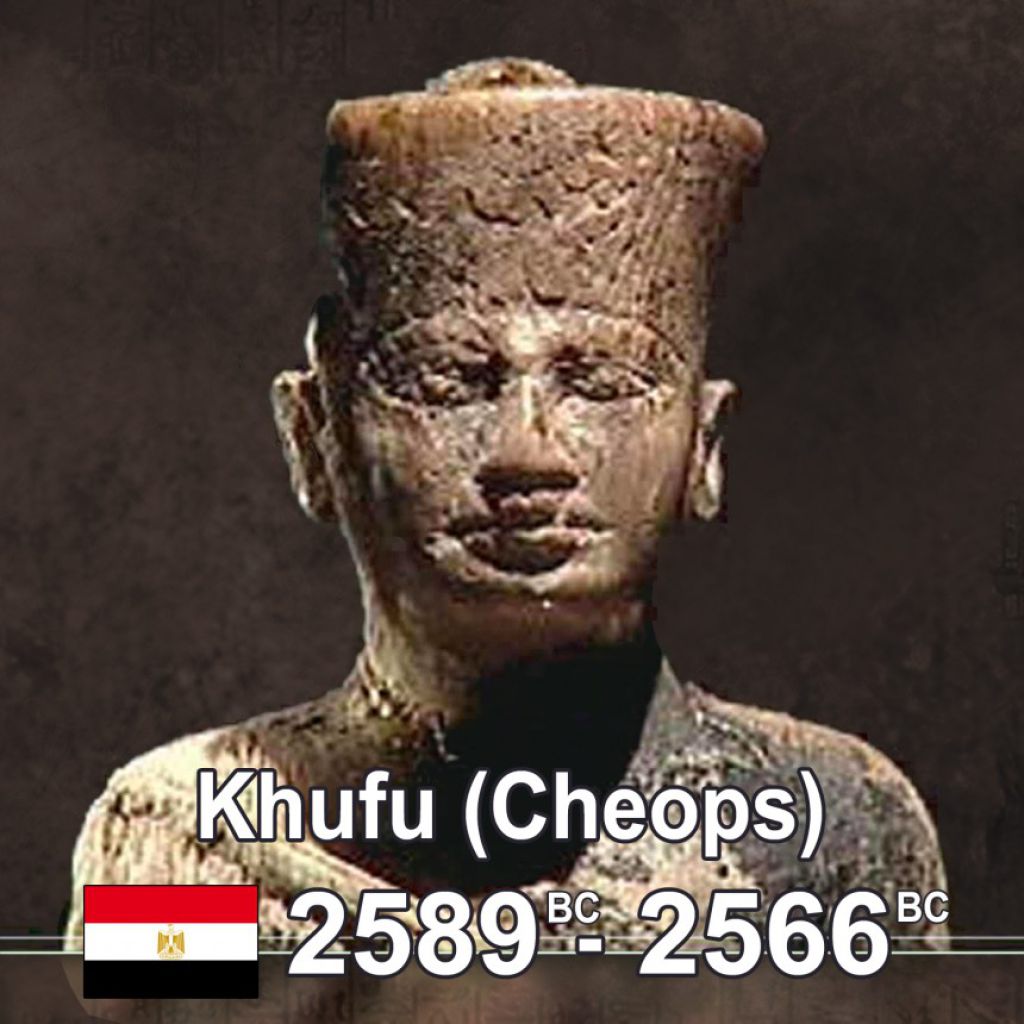 Khufu, known to the Greeks as Cheops, was an ancient Egyptian monarch who ruled during the Fourth Dynasty, in the first half of the Old Kingdom period (26th century BC). Khufu succeeded his father Sneferu as the second king of the 4th Dynasty.

Khufu is generally accepted as having commissioned the Great Pyramid of Giza, one of the Seven Wonders of the Ancient World, but many other aspects of his reign are poorly documented.

The only completely preserved portrait of the king is a three-inch high ivory figurine found in a temple ruin of a later period at Abydos in 1903. All other reliefs and statues were found in fragments, and many buildings of Khufu are lost. Everything known about Khufu comes from inscriptions in his necropolis at Giza and later documents. For example, Khufu is the main character noted in the Papyrus Westcar from the 13th dynasty.

Most documents that mention king Khufu were written by ancient Egyptian and Greek historians around 300 BC. Khufu's obituary is presented there in a conflicting way: while the king enjoyed a long-lasting cultural heritage preservation during the period of the Old Kingdom and the New Kingdom, the ancient historians Manetho, Diodorus and Herodotus hand down a very negative depiction of Khufu's character. Thanks to these documents, an obscure and critical picture of Khufu's personality persists.

Khufu's name was dedicated to the earth deity Khnum, which might point to an increase of Khnum's popularity and religious importance. In fact, several royal and religious titles introduced at his time may point out that Egyptian pharaohs sought to accentuate their divine origin and status by dedicating their official cartouche names to certain deities. Khufu may have viewed himself as a divine creator, a role that was already given to Khnum, the god of earth, creation, and growth. As a consequence, the king connected Khnum's name with his own. Khufu's name means "Khnum protect me"

The pharaoh officially used two versions of his birth name: Khnum-khuf and Khufu. The first (complete) version clearly exhibits Khufu's religious loyalty to Khnum, the second (shorter) version does not. It is unknown as to why the king would use a shortened name version since it hides the name of Khnum and the king's name connection to this god. It might be possible though, that the short name wasn't meant to be connected to any god at all.[5][10]

The following list presents family members, which can be assigned to Khufu with certainty.

Hetepheres I : Most possibly his mother. Wife of king Sneferu and well known for her precious grave goods found at Giza.

Meritites I : First wife of Khufu.

Henutsen : Second wife of Khufu. She is mentioned on the famous Inventory Stela.

Nefermaat : Half-brother; buried at Meidum and owner of the famous "mastaba of the geese"

Rahotep : Elder brother or half-brother. Owner of a life-size double statue portraying him and his wife Nofret

Kawab : Most possibly the eldest son and crown prince, he died before Khufu's own end of reign and thus did not follow Khufu on the throne

Baufra : Possibly a son of Khufu, but neither archaeologically nor contemporarily attested. Only known from two much later documents

Khamerernebty I : Wife of king Khafra and mother of Menkaura

0
Facebook
Twitter
WhatsApp
wmHGhYwpyb0 khufu-and-the-magician-in-the-ancient-egyptian-westcar-papyrus-text Khufu and the Magician in the Ancient Egyptian Papyrus Text The Westcar Papyrus, housed in the Ägyptisches Museum, Berlin, contains five stories told by the sons of the 4th dynasty Pharaoh Khufu. These stories were most likely written in the 18th dynasty or later.

Ancient Architects 1 year ago
KF2iyfricVU 10-reasons-why-khufu-built-the-great-pyramid-of-egypt 10 Reasons why Khufu built the Great Pyramid of Egypt Over a month ago I presented by opinion on the history of the Great Pyramid based on everything I’ve learned, in what turned out to be a 90-minute presentation.

Ancient Architects 1 year ago
KZuqnsLWKJw great-sphinx-of-egypt-the-face-of-king-khufu Great Sphinx of Egypt | The Face of King Khufu A little over a year ago I made the first video in a two-part series that looked at the face of the Great Sphinx and who exactly we are looking at.

Ancient Architects 1 year ago
Jk-BlkL_X0Y lost-in-giza-the-mystery-of-king-khufus-mother Lost in Giza | The Mystery of King Khufu’s Mother In the eastern field of mastabas, directly in front of the Great Pyramid you have the tombs of Khufu’s powerful brother, Ankhhaf, Khufu’s sons, the crown prince Kawab and Khufukhaf, possibly Khufu’s wife, Henutsen.

Ancient Architects 2 years ago
IVs7UUYxCWU searching-for-khufu-more-anomalies-under-the-great-pyramid Searching for Khufu | More Anomalies under Great Pyramid Hopefully you saw the recent video on the Ancient Architects channel, on my ideas regarding the lost tomb of King Khufu, which Herodotus states was beneath the Great Pyramid and by joining together various lines of evidence this did seem feasible to me

Ancient Architects 2 years ago
dGHIp42habg the-khufu-ship The Khufu Ship The Khufu ship is an intact full-size vessel from Ancient Egypt that was sealed into a pit in the Giza pyramid complex at the foot of the Great Pyramid of Giza around 2500 BC. The ship now is preserved in the Giza Solar boat museum.

The Admin 6 years ago