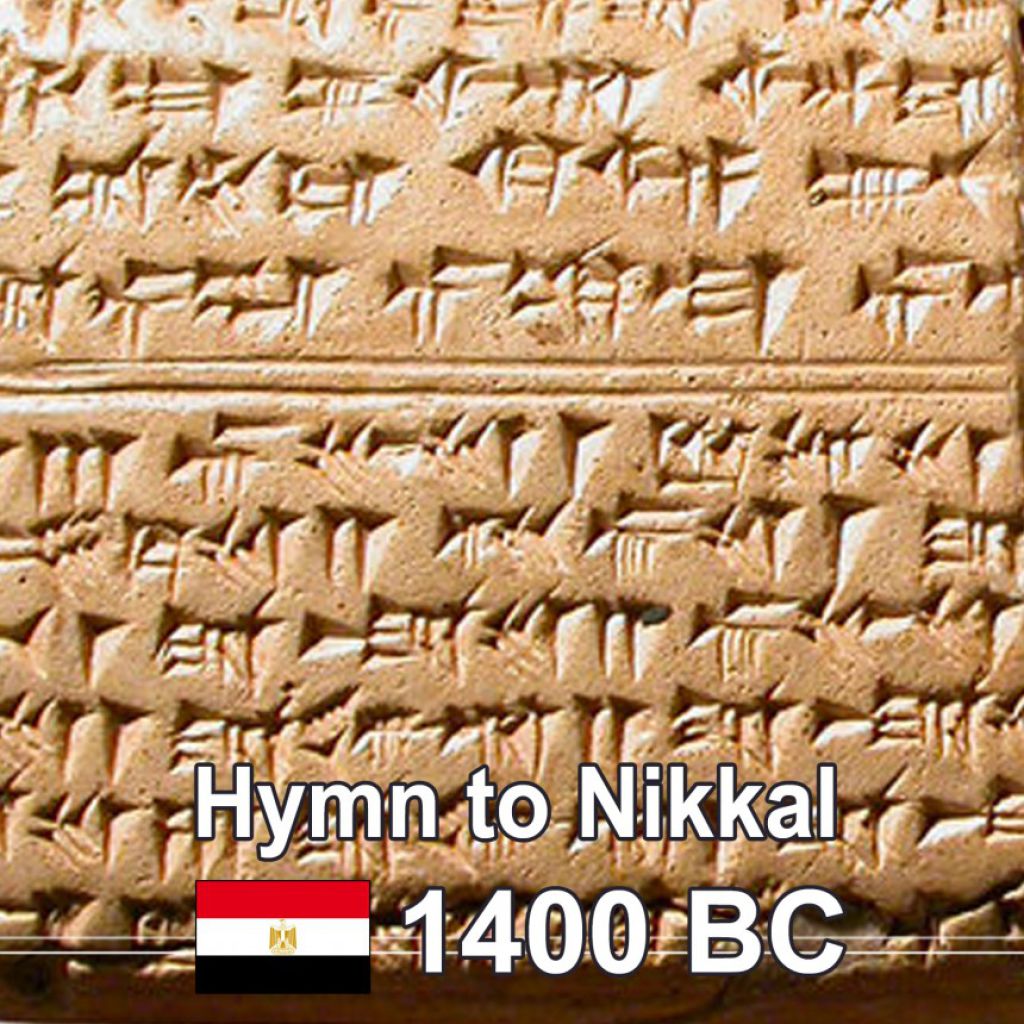 The Hurrian songs are a collection of music inscribed in cuneiform on clay tablets excavated from the ancient Amorite-Canaanite city of Ugarit, a headland in northern Syria, which date to approximately 1400 BC.

One of these tablets, which is nearly complete, contains the Hurrian hymn to Nikkal (also known as the Hurrian cult hymn or A Zaluzi to the Gods, or simply h.6), making it the oldest surviving substantially complete work of notated music in the world.

While the composers' names of some of the fragmentary pieces are known, h.6 is an anonymous work. The hymn is dedicated the Hurrians’ goddess of the orchards Nikkal.

The Hurrians, also called Hari, Khurrites, Hourri, Churri, Hurri or Hurriter, were a people of the Bronze Age Near East. They spoke a Hurro-Urartian language called Hurrian and lived in Anatolia and Northern Mesopotamia.

The largest and most influential Hurrian nation was the kingdom of Mitanni, the Mitanni perhaps being Indo-Iranian speakers who formed a ruling class over the Hurrians.

The population of the Indo-European-speaking Hittite Empire in Anatolia included a large population of Hurrians, and there is significant Hurrian influence in Hittite mythology.

By the Early Iron Age, the Hurrians had been assimilated with other peoples. Their remnants were subdued by a related people that formed the state of Urartu.

According to a hypothesis by I.M. Diakonoff and S. Starostin, the Hurrian and Urartian languages shared a common ancestor and were related to the Northeast Caucasian languages.

The present-day Armenians are an amalgam of the Indo-European groups with the Hurrians and Urartians.

Nikkal, Ugaritic 𐎐𐎋𐎍 nkl, is a goddess of Ugarit/Canaan and later of Phoenicia. She is a goddess of orchards, whose name means "Great Lady and Fruitful" and derives from Akkadian / West Semitic "´Ilat ´Inbi" meaning "Goddess of Fruit". De Moor translates Ugaritic 𐎛𐎁 "ib" as "blossom" which survives in biblical Hebrew as אֵב (Strongs Concordance 3) and cites Canticles 6:11 as a survival of this usage

She is daughter of Khirkhibi, the Summer's King, and is married to the moon god Yarikh, who gave her necklaces of lapis-lazuli. Their marriage is lyrically described in the Ugaritic text "Nikkal and the Kathirat". She may have been feted in late summer when tree fruits had been finally harvested. Her Sumerian equivalent is the goddess Ningal, the mother of Inanna and Ereshkigal.

The oldest incomplete annotated piece of ancient music is a Hurrian song, a hymn in Ugaritic cuneiform syllabic writing which was dedicated to Nikkal. This was published upon its discovery in Ugarit by Emmanuel Laroche, first in 1955 and then more fully in 1968 and has been the focus of many subsequent studies in palaeomusicology by, amongst others, Anne Draffkorn Kilmer, who gave it the title of "The Hymn to Nikkal".

The complete song is one of about 36 such hymns in cuneiform writing, found on fragments of clay tablets excavated in the 1950s from the Royal Palace at Ugarit (present day Ras Shamra, Syria), in a stratum dating from the fourteenth century BC, but is the only one surviving in substantially complete form.

An account of the group of shards was first published in 1955 and 1968 by Emmanuel Laroche, who identified as parts of a single clay tablet the three fragments catalogued by the field archaeologists as RS 15.30, 15.49, and 17.387.

The tablet h.6 contains the lyrics for a hymn to Nikkal, a Semitic goddess of orchards, and instructions for a singer accompanied by a nine-stringed sammûm, a type of harp or, much more likely, a lyre. One or more of the tablets also contains instructions for tuning the harp.

The Hurrian hymn pre-dates several other surviving early works of music, e.g., the Seikilos epitaph and the Delphic Hymns, by a millennium, but its transcription remains controversial. A reconstruction by Marcelle Duchesne-Guillemin may be heard at the Urkesh webpage, though this is only one of at least five "rival decipherments of the notation, each yielding entirely different results".

The tablet is in the collection of the National Museum of Damascus. 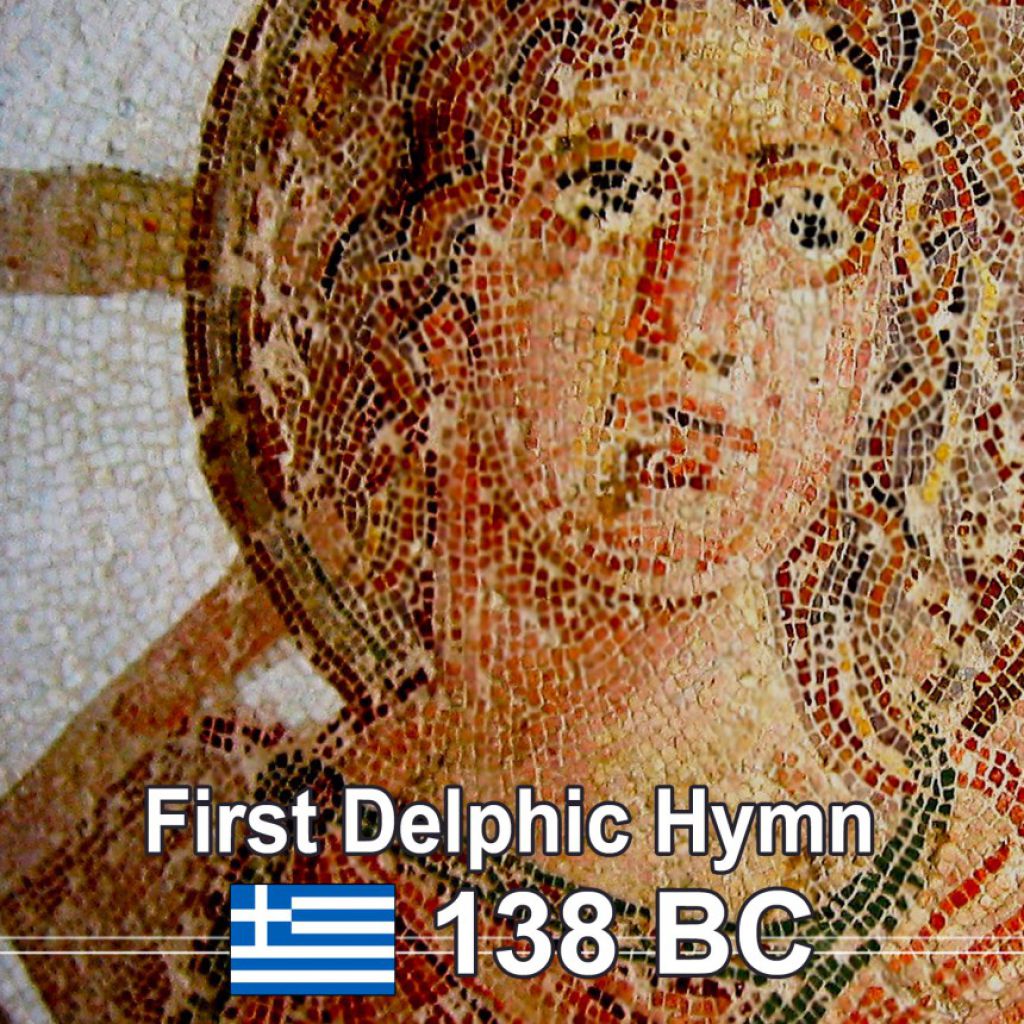