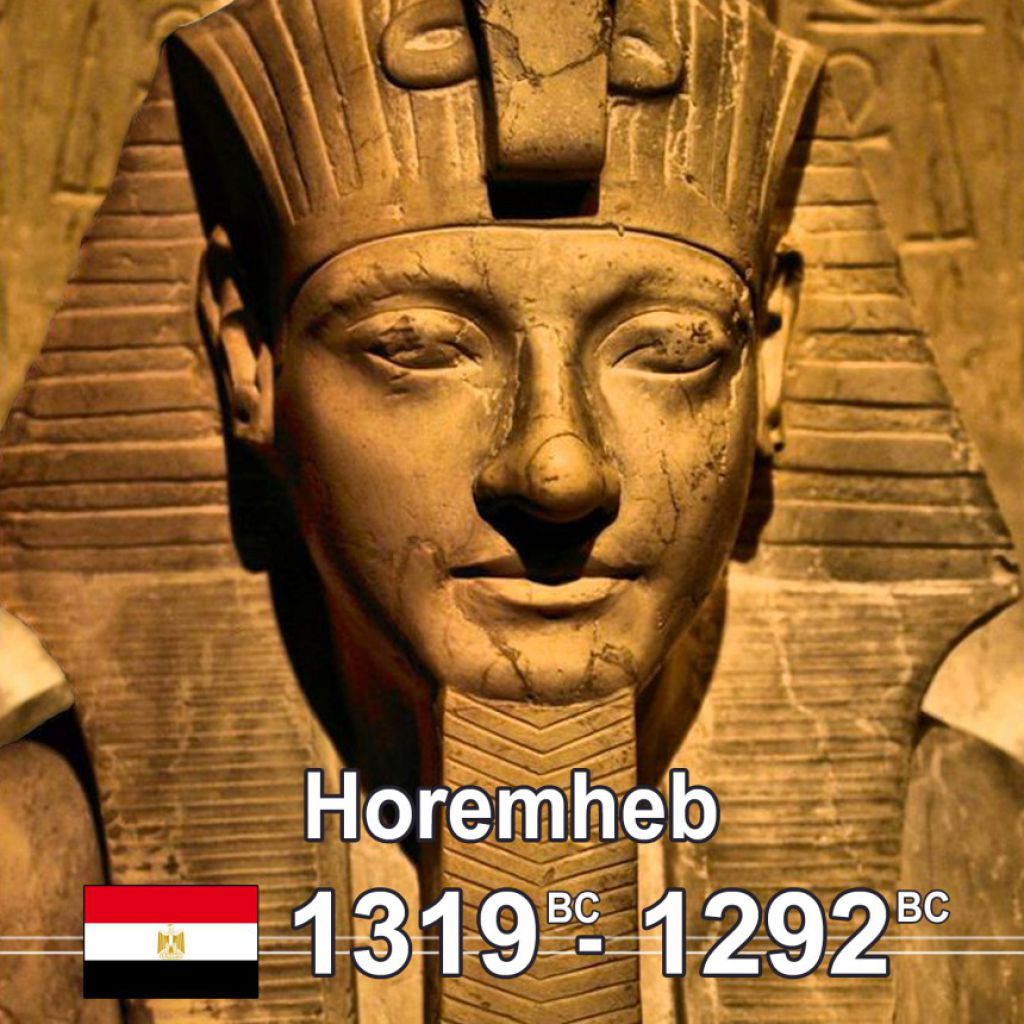 Horemheb (meaning Horus is in Jubilation) was the last pharaoh of the 18th Dynasty of Egypt. He ruled for 14 years somewhere between 1319 BC and 1292 BC.

He had no relation to the preceding royal family other than by marriage to Mutnedjmet, who is disputed to have been the daughter of his predecessor Ay; he is believed to have been of common birth.

Before he became pharaoh, Horemheb was the commander in chief of the army under the reigns of Tutankhamun and Ay. After his accession to the throne, he reformed the Egyptian state and it was under his reign that official action against the preceding Amarna rulers began. Due to this, he is considered the man who restabilized his country after the troublesome and divisive Amarna Period.

Horemheb demolished monuments of Akhenaten, reusing their remains in his own building projects, and usurped monuments of Tutankhamun and Ay. Horemheb presumably remained childless since he appointed his vizier Paramesse as his successor, who would assume the throne as Ramesses I.

Upon his accession, Horemheb initiated a comprehensive series of internal transformations to the power structures of Akhenaten's reign, due to the preceding transfer of state power from Amun's priests to Akhenaten's government officials. Horemheb "appointed judges and regional tribunes ... reintroduced local religious authorities" and divided legal power "between Upper Egypt and Lower Egypt" between "the Viziers of Thebes and Memphis respectively."

These deeds are recorded in a stela which the king erected at the foot of his Tenth Pylon at Karnak. Occasionally called The Great Edict of Horemheb, it is a copy of the actual text of the king's decree to re-establish order to the Two Lands and curb abuses of state authority. The stela's creation and prominent location emphasizes the great importance which Horemheb placed upon domestic reform.

Because of his unexpected rise to the throne, Horemheb had two tombs constructed for himself: the first - when he was a mere nobleman - at Saqqara near Memphis, and the other in the Valley of the Kings, in Thebes, in tomb KV57 as king. His chief wife was Queen Mutnedjmet, who may have been Nefertiti's younger sister. They did not have any children. He is not known to have any children by his first wife, Amenia, who died before Horemheb assumed power.

The most recent archaeological evidence from three excavation seasons conducted under G.T. Martin in 2006 and 2007 establishes that Horemheb most likely died after a maximum reign of 14 years, based on a large hoard of 168 inscribed wine sherds and dockets recently discovered below densely compacted debris in a great shaft (called Well Room E) in this king's royal KV57 tomb.

Since Horemheb remained childless, he appointed his Vizier, Paramesse, to succeed him upon his death, both to reward Paramesse's loyalty and because the latter had both a son and grandson to secure Egypt's royal succession. Paramesse employed the name Ramesses I upon assuming power and founded the 19th Dynasty of the New Kingdom.