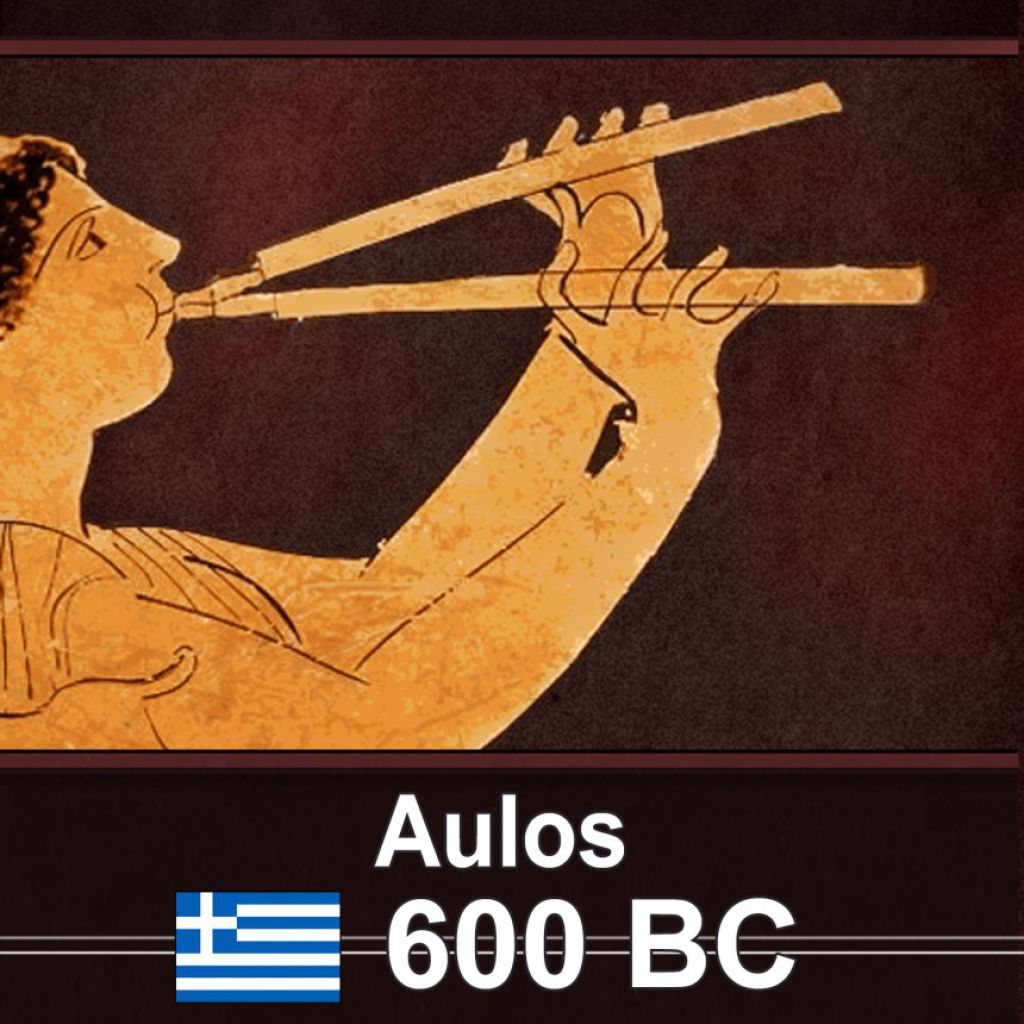 An aulos was an ancient Greek wind instrument, depicted often in art and also attested by archaeology.

An aulete was the musician who performed on an aulos. The ancient Roman equivalent was the tibicen (plural tibicines), from the Latin tibia, "pipe, aulos." The neologism aulode is sometimes used by analogy with rhapsode and citharode (citharede) to refer to an aulos player, who may also be called an aulist; however, aulode more commonly refers to a singer who sang the accompaniment to a piece played on the aulos.

There were several kinds of aulos, single or double. The most common variety was a reed instrument. Archeological finds, surviving iconography and other evidence indicate that it was double-reeded, like the modern oboe, but with a larger mouthpiece, like the surviving Armenian duduk. A single pipe without a reed was called the monaulos (μόναυλος, from μόνος "single"). A single pipe held horizontally, as the modern flute, was the plagiaulos (πλαγίαυλος, from πλάγιος "sideways"). A pipe with a bag to allow for continuous sound, that is a bagpipe, was the askaulos (ἀσκαυλός from ἀσκός askos "wine-skin").

Though aulos is often erroneously translated as "flute", it was a double-reeded instrument, and its sound - described as "penetrating, insisting and exciting" - was more akin to that of the bagpipes, with a chanter and (modulated) drone. Like the Great Highland Bagpipe, the aulos has been used for martial music, but it is more frequently depicted in other social settings. It was the standard accompaniment of the passionate elegiac poetry. It also accompanied physical activities such as wrestling matches, the broad jump, the discus throw and to mark the rowing cadence on triremes, as well as sacrifices and dramas. Plato associates it with the ecstatic cults of Dionysus and the Korybantes, banning it from his Republic but reintroducing it in "Laws".

It appears that some variants of the instrument were loud, shrill, and therefore very hard to blow. A leather strap, called a phorbeiá (φορβεία) in Greek or capistrum in Latin, was worn horizontally around the head with a hole for the mouth by the auletai to help support the lips and avoid excessive strain on the cheeks due to continuous blowing. Sometimes a second strap was used over the top of the head to prevent the phorbeiá from slipping down. Aulos players are sometimes depicted with puffed cheeks. The playing technique almost certainly made use of circular breathing, very much like the Sardinian launeddas and Armenian duduk, and this would give the aulos a continuous sound.

In myth, Marsyas the satyr was supposed to have invented the aulos, or else picked it up after Athena had thrown it away because it caused her cheeks to puff out and ruined her beauty. In any case, he challenged Apollo to a musical contest, where the winner would be able to "do whatever he wanted" to the loser—Marsyas's expectation, typical of a satyr, was that this would be sexual in nature. But Apollo and his lyre beat Marsyas and his aulos. And since the pure lord of Delphi's mind worked in different ways from Marsyas's, he celebrated his victory by stringing his opponent up from a tree and flaying him alive. King Midas was cursed with donkey's ears for judging Apollo as the lesser player. Marsyas's blood and the tears of the Muses formed the river Marsyas in Asia Minor.

"This tale was a warning against committing the sin of "hubris", or overweening pride, in that Marsyas thought he might win against a god. Strange and brutal as it is, this myth reflects a great many cultural tensions that the Greeks expressed in the opposition they often drew between the lyre and aulos: freedom vs. servility and tyranny, leisured amateurs vs. professionals, moderation (sophrosyne) vs. excess, etc. Some of this is a result of 19th century AD "classical interpretation", i.e. Apollo versus Dionysus, or "Reason" (represented by the kithara) opposed to "Madness" (represented by the aulos). In the temple to Apollo at Delphi, there was also a shrine to Dionysus, and his Maenads are shown on drinking cups playing the aulos, but Dionysus is sometimes shown holding a kithara or lyre. So a modern interpretation can be a little more complicated than just simple duality"

This opposition is mostly an Athenian one. It might be surmised that things were different at Thebes, which was a center of aulos-playing. At Sparta - which had no Bacchic or Korybantic cults to serve as contrast - the aulos was actually associated with Apollo, and accompanied the hoplites into battle.

Greece
greece
WE VALUE YOUR PRIVACY!
No email-address required.
Just add your comment,
a UNIQUE username
and a phrase to be remembered by.
You will be automagically signed-in.