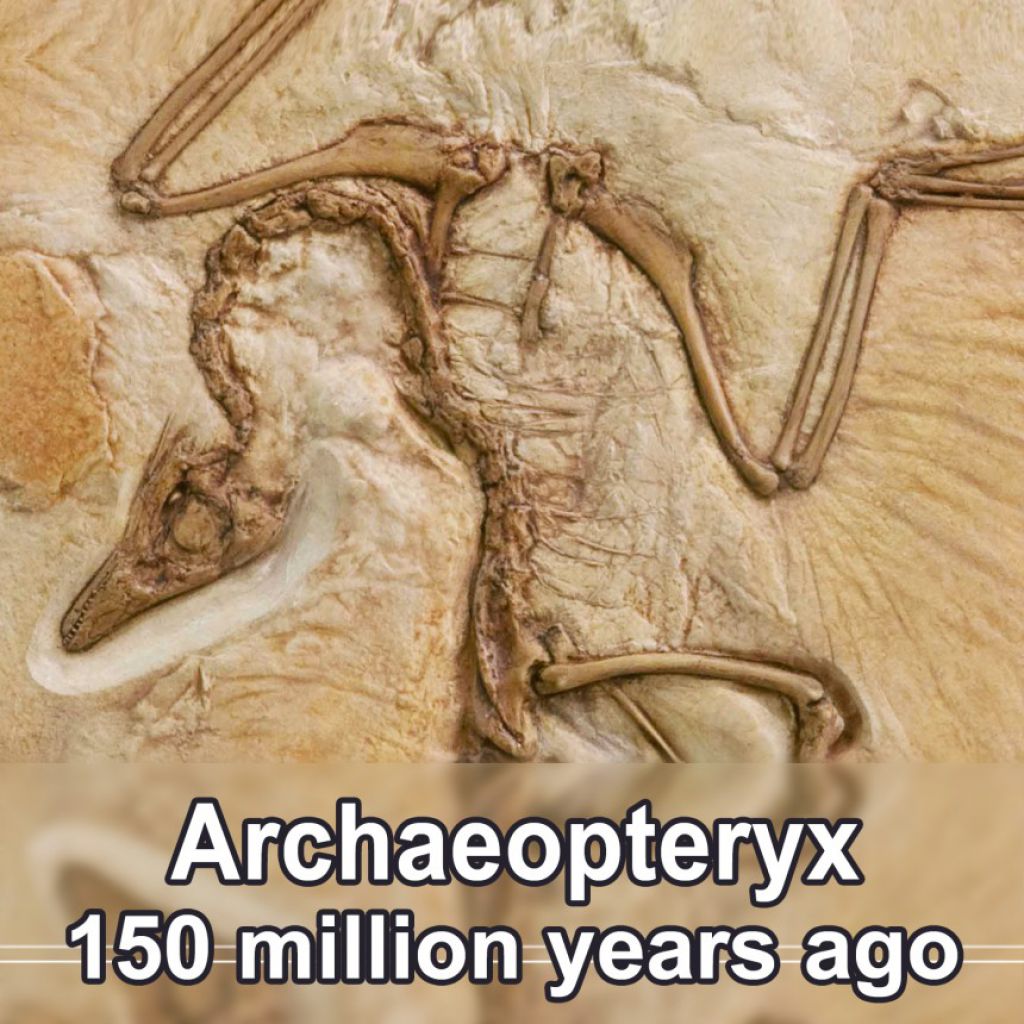 Archaeopteryx, meaning "old wing" (sometimes referred to by its German name Urvogel ("original bird" or "first bird")), is a genus of bird-like dinosaurs that is transitional between non-avian feathered dinosaurs and modern birds.

The name derives from the ancient Greek ἀρχαῖος (archaīos) meaning "ancient", and πτέρυξ (ptéryx), meaning "feather" or "wing". Between the late nineteenth century and the early twenty-first century, Archaeopteryx had been generally accepted by palaeontologists and popular reference books as the oldest known bird (member of the group Avialae). Older potential avialans have since been identified, including Anchiornis, Xiaotingia, and Aurornis.

Archaeopteryx lived in the Late Jurassic around 150 million years ago, in what is now southern Germany during a time when Europe was an archipelago of islands in a shallow warm tropical sea, much closer to the equator than it is now. Similar in size to a Eurasian magpie, with the largest individuals possibly attaining the size of a raven, the largest species of Archaeopteryx could grow to about 0.5 m (1 ft 8 in) in length. Despite their small size, broad wings, and inferred ability to fly or glide, Archaeopteryx had more in common with other small Mesozoic dinosaurs than with modern birds. In particular, they shared the following features with the dromaeosaurids and troodontids: jaws with sharp teeth, three fingers with claws, a long bony tail, hyperextensible second toes ("killing claw"), feathers (which also suggest warm-bloodedness), and various features of the skeleton.

These features make Archaeopteryx a clear candidate for a transitional fossil between non-avian dinosaurs and birds. Thus, Archaeopteryx plays an important role, not only in the study of the origin of birds, but in the study of dinosaurs. It was named from a single feather in 1861. That same year, the first complete specimen of Archaeopteryx was announced. Over the years, ten more fossils of Archaeopteryx have surfaced. Despite variation among these fossils, most experts regard all the remains that have been discovered as belonging to a single species, although this is still debated.

Most of these eleven fossils include impressions of feathers. Because these feathers are of an advanced form (flight feathers), these fossils are evidence that the evolution of feathers began before the Late Jurassic. The type specimen of Archaeopteryx was discovered just two years after Charles Darwin published On the Origin of Species. Archaeopteryx seemed to confirm Darwin's theories and has since become a key piece of evidence for the origin of birds, the transitional fossils debate, and confirmation of evolution.

In March 2018, scientists reported that Archaeopteryx was likely capable of flight, but in a manner substantially different from that of modern birds.